The Cambridgeshire Autonomous Metro (CAM) scheme, is intended to comprise a wider regional public transport network extending from Haverhill to St Neots and other destinations including tunnelled sections under Cambridge city centre. 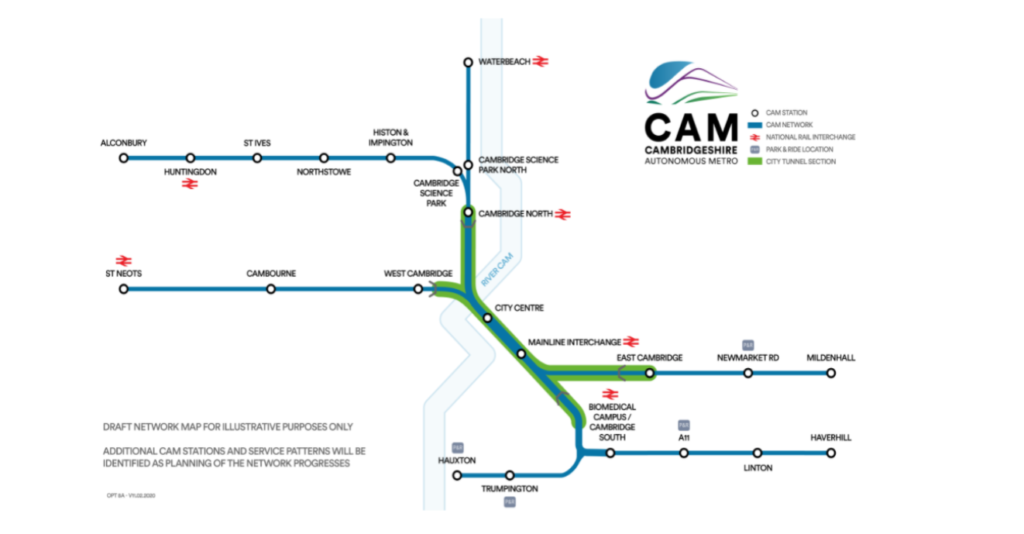 The Cambridgeshire Autonomous Metro (CAM) scheme, is intended to comprise a wider regional public transport network extending from Haverhill to St Neots and other destinations including tunnelled sections under Cambridge city centre. The CAM is intended to operate with high quality, low emission, rubber tyred, ‘trackless metro’ vehicles according to the Strategic Outline Business Case (Steer, 2019).

The implication of the plan is that, at a later date, any new public transport routes must be “fully or largely segregated on the ‘regional’ sections” (Steer, 2019) to ensure integration and ultimately in order to gain approval.

The Metro is currently envisioned in two phases: first the inner corridors which initially would be bus routes, then the tunnelled sections and outer corridors.

Of the proposed busway routes, CSET is the most advanced in the planning process. This has passed the major milestone of GCP selecting a preferred route, meaning the work of choosing what to do is largely over, and work is underway on detailed design – albeit the green light has not yet been given. The expected completion date is 2024.

Phase two is when CAM would start looking and functioning more like a metro. The city’s busways would be connected, converted and extended to form one system, linked via underground tunnels and stations in the city centre, and extending out at the other end to reach places further afield.

Unlike the busways, for which detailed planning is ongoing and some form of funding arrangements are already in place, there is as yet no detailed plan of how this metro would operate or how it would be paid for.

The first phase of the metro would be the “inner corridors”. They are currently envisioned as purpose-built busways which could be converted into a metro (Image: Greater Cambridge Partnership)

This effectively dictates the adoption of rubber tyred, ‘trackless metro’ vehicles for new Cambridgeshire projects – how does this fit with Cambridge South Station and upgrades to railway infrastructure? – Matt Hancock is supporting a local bid to the government’s “Restoring Your Railway Fund” (RYR) to explore the prospects for reopening the railway from Cambridge to Haverhill. Does this mean central government isn’t signed up to the obligations of CAM?

Regionally, the Cambridgeshire and Peterborough Combined Authority wants the busways to be turned into metro routes at some point in the future, but are so far unconvinced about the specifics of the other three routes being proposed. 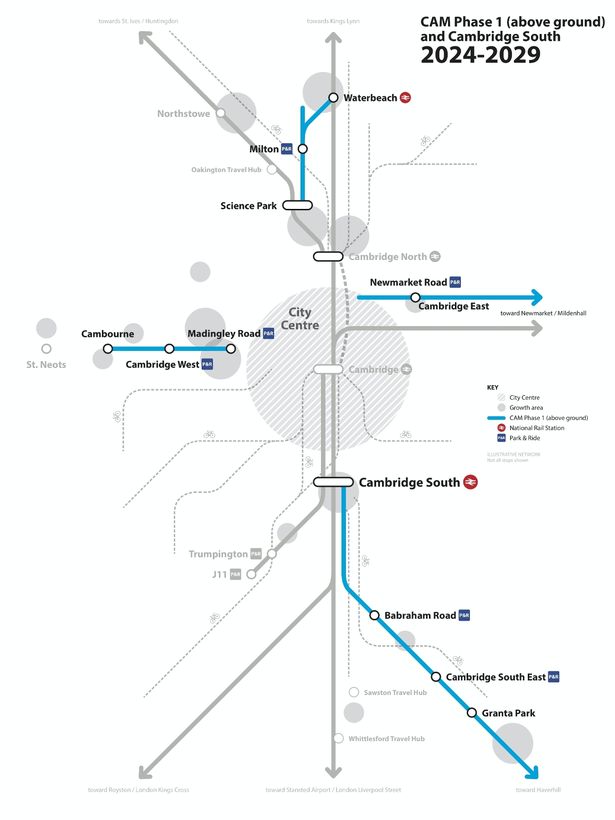 As at Feb 2021, consultation with the Parish on this issue does not seem a priority (as we are already working on specific CSET proposals). However, providing information, such as this outline would be helpful to enable local people to understand the big picture and cumulative impact.

GSPC support the concept of a unified transport system being established over the next twenty years but with so many rail projects on the cards, commitment to a rubber tyred metro system, seems unrealistic and risks the possibility of more transport infrastructure being developed than is actually required.

GSPC support initiatives that deliver “the right infrastructure in the right places at the right times…” as per paras 1.22 and 1.24 of the Ox-Cam Spatial Framework.