This is a National Infrastructure Project with clear Central Government support which is intended to facilitate east-west travel and to bring economic benefits to the area between Oxford and Cambridge (the “Oxford-Cambridge Arc”). 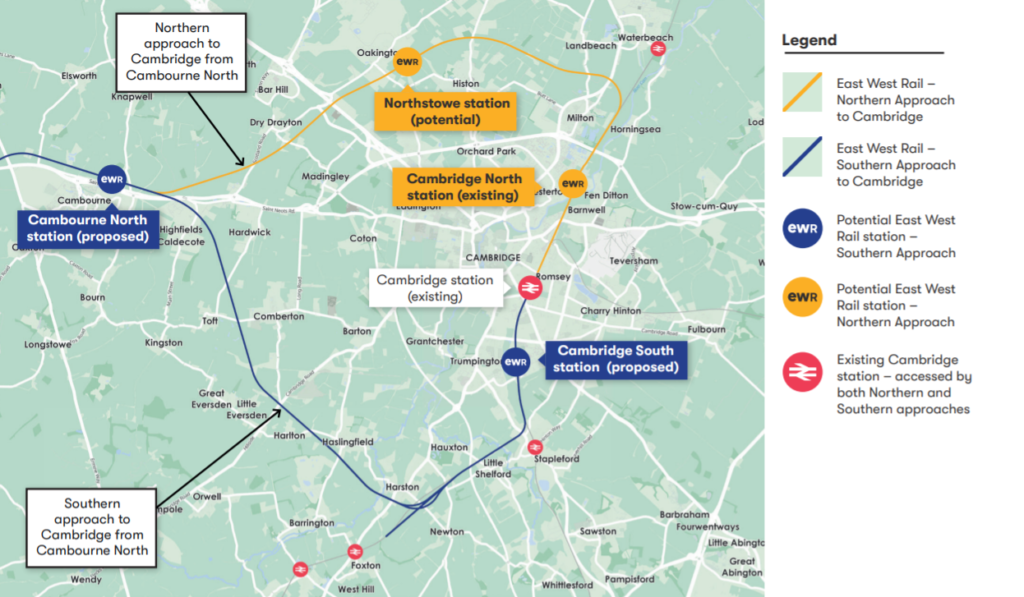 This is a National Infrastructure Project with clear Central Government support which is intended to facilitate east-west travel and to bring economic benefits to the area between Oxford and Cambridge (the “Oxford-Cambridge Arc”).  The sections between Oxford and Bicester, between Bletchley and Bedford, between Cambridge and Norwich and between Cambridge and Ipswich are all in use, though not operated or badged as East-West Rail.  Between Bicester and Bletchley, the old trackbed has been preserved and will be reinstated.  This leaves Bedford to Cambridge as the only stretch where the line will traverse ‘virgin’ territory.

A company – East West Rail Company Ltd – has been set up to plan the project and oversee its delivery.  For brevity we use EWR to refer to both the line and the company in this website.

EWR undertook a non-statutory consultation which resulted in the “Option E” corridor being chosen in January 2020 as the route between Bedford and Cambridge.  Option E serves Cambourne and approaches Cambridge from the south.

A second non-statutory consultation was undertaken in March to June 2021 to examine detailed route alignments along the Option E corridor. 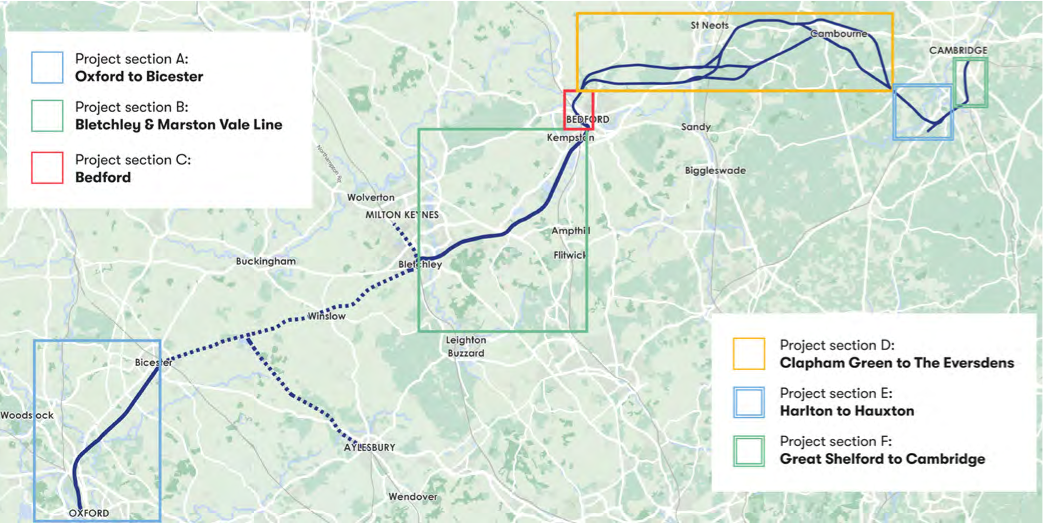 In March 2021, the preferred route option was published.  Please see Consultation section below.

What is freight? A Working Group Discussion Paper outlining our understanding (Apr 22)

Thank you for responding to EWR Consultation from EWR Co.

Two information and consultation events have been held to date:

Route alignments have been announced by EWR (April 2021) and public consultation online and via online events was held between April and June 2021.

Great Shelford Parish Council takes issue with the Option E route corridor being selected without proper consideration of the alternatives and believes that EWR should undertake analysis and full public consultation on a northern route.

GSPC notes the cumulative impact of current infrastructure projects in our locality.

All route options through Great Shelford will have a net detrimental impact on the village.

We responded in detail to the 2021 Non-Statutory Consultation.

We have pledged £25,000 to Cambridge Approaches to represent GSPC’s position in a Judicial Review.

As of March 2022, EWR believes that it will publish the report regarding the results of its 2021 non statutory consultation in Summer 2022.