One of our Spotlight Groups is looking at Transport issues.  The group is now being led by Barbara Kettel and had its first face to face meeting on 27 March 2017. Notes of that and subsequent meetings can be downloaded here:

Identifying the issue of parking in the centre of Great Shelford as being a key issue, the group undertook a 12-hour survey of the car parks in September 2017. Their report showed that of the nearly 100 spaces monitored throughout the day, only 10 were available at any one time to short-stay visitors to the shops and facilities, all the other spaces having been occupied by cars staying for at least two hours, often a lot longer. Their Parking Survey full report was presented to Great Shelford Parish Council’s 2017 09 19 Highways Committee Meeting Minutes. The graphic opposite illustrates the results well.

Originally led by Jim Chisholm, the group had started off by discussing these issues by email, under the broad headings of: 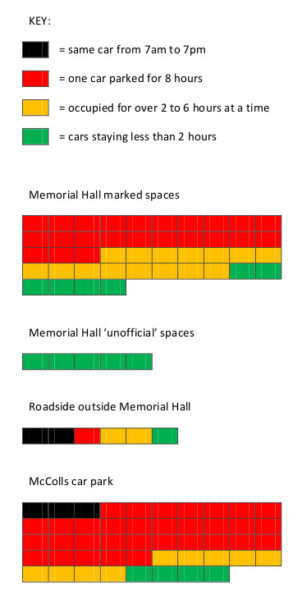